Those who know me well—ok, perhaps many who just know me, in passing…or by reputation alone—know that clothing and the related is something for which I hold great interest and passion. Note too that I specifically reference “clothing” rather than “fashion”…there is a difference.

This goes back to my first job in a department store, working primarily in the men’s department. Throughout my early career, this theme has reappeared, first working as an assistant manager in a young men’s store, and later, perhaps still one of my favorite jobs of all time, working in a small-shop men’s store…the store was small…we fit men of all sizes.

Such was the influence that at one time I even considered going off to one of those apparel/design colleges, and for awhile I dreamed of someday having my own men’s store. Of course none of these came to fruition, though perhaps when I retire I’ll go back and work at a men’s store somewhere…every true men’s store has to have a crotchety old salesman, it’s a law of authenticity.

I digress, of course, from the focus of the here and now.

So the other night, I had a wild idea that I would attempt to “repair” my very abused, very neglected, very old, though very loved pair of L.L. Bean Blucher Mocs. 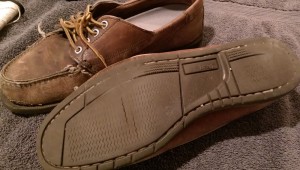 Abused and neglected? I’m not sure I’ve ever cleaned them and fairly positive they’ve never received the faintest hint of a leather conditioner or mink oil since I bought them.

Old? Looking over my financial records, I found a record of a purchase of shoes from L.L. Bean for $89.00 back in 1996. I wasn’t thinking these were actually that old, but perhaps because that price, as they say, is right. And that’s actually $10 more than they are today!

I’ve only owned two pairs of Blucher Mocs in my life, and the pair before these were back in college and even more neglected…in their late stage of life they were mostly “contained” with the help of a few wraps of gaffer’s tape around the toe box—all pre-“there I fixed it.”

Admittedly, all of this means that the time I estimated it would likely take to repair these wasn’t even fiscally justified…ironically, I had in fact come to that conclusion and had already purchased a successor, just 366 days prior to this undertaking (I keep very meticulous financial records, but that probably comes as no surprise at this point).

The thing is, I continued to use them as my general, kick around, fall back shoe (this is such an awesome shoe, if you have the means, I highly recommend it). The successor was a slight depart, being the L.L. Bean Camp Moc—I said “slight”—which I had yet to ever own and thought, “why not change is good.” Perhaps this was at the heart of my seeming inability to finally part with the beloved Bluchers.

Anyway, I’ve been on a bit of a “shoe-buzz” lately—save that for later—so the embers were stoked to red-hot anyway. Besides, I believe that, even with L.L. Bean’s “100% Satisfaction Guarantee” of “we’re happy to accept your exchange or return at any time,” product owners must take on some due diligence and responsibility for the products they purchase.

Here is my little DIY attempt at resewing and repairing my Blucher Mocs.

While dirty and extremely dried out, the primary technical challenge I was attempting to address was the seam splitting, and just plain seam eroding, of the top and front/side parts of the vamp, in shoe terminology.

Terminology aside, the issue is clearly evident 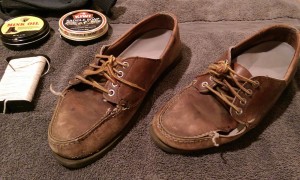 Fortunately, in this instance, special tools, and hopefully knowledge, would not be required. In fact, the tools were probably about as un-special as you could get…a large needle from the steering wheel wrap kit used on my previous car, common household “newspaper bundling” kind of multi-strand string, a standard seam ripper, and an old towel for placing on the counter on which to work. I also used some basic Kiwi saddle soap to clean them up and some mink oil to help condition (mostly) and waterproof them.

An old sock, a little water, and the saddle soap helped to clean things up a bit…and mostly add a little moisture back into them so they didn’t disintegrate. I’ll confess now that half of the reason for this post is a repentance for the extreme gross neglect of these shoes.

Next I took off a fair bit of the string, threaded the needle, and started the sewing on the open end to provide an anchor. From there, I went ahead and used the seam ripper to remove the old seam thread…which as nasty as those remnants were, the more likely it is that these were in fact 19 years old. 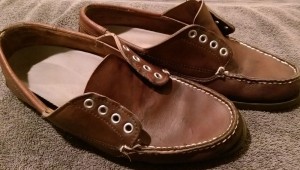 From there, the sewing was actually quite easy and quick. I probably spent more time pulling out all of the seam remnants. Understand, we’re talking about sewn leather here, so the holes are sizable and very defined. The most challenging part to the sewing was on the ends to create the “box-seam” that is found on the Bluchers, at which I just had to fake my way through.

If you are following along at home or wanting to attempt this yourself, the way I approached it…no idea if this was accurate to the original…was to sew through one way, creating a kind of “dentil” (wood working parlance) seam like this _ –_–_–_ all the way to one end, box off, then return, essentially filling in the gaps ====== and then boxing off and tying off on the other end. Functionality was the key as much as visual authenticity at this point. 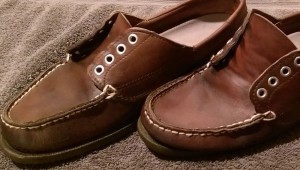 Once sewn, I hit both heavily with mink oil. Ideally a good leather conditioner might have been more ideal given their dismal condition, but not having any at that precise moment and not having the patience to pause the project, mink oil would do.

This step was not only critical to the shoes, but perhaps just as critical to the new seam thread. While very strong, this “thread” is just thick, multi-strand cotton string, so I’ll want to follow up with a wax treatment to help protect it from the elements and simply drying out and breaking. 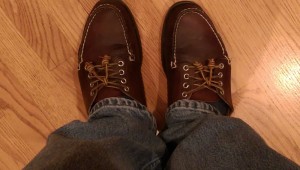 I would love to think that I just gained another 20 years or so of life, but that’s not likely. Looking at the photos showing the soles, you can see that the soles aren’t overly worn, but worn enough that some of the thread securing the upper to the sole has worn down. We all have to acknowledge our own limitations, and I think resoling is mine.

And at that point, the cost of having these professionally resoled is comparable to just buying a new pair. Besides, even if my resew only bought me another 5-7 years…a $20 or so role of gaffer’s tape should cover me for another 5 years on that!

Amazingly, this entire process only took a couple hours or so, including the time to snap the photos…so again while perhaps not the best fiscal use of time, regardless, this is an undertaking that few can claim, and upon completion, you can’t help but feel a bit, “yeah, I did that.” 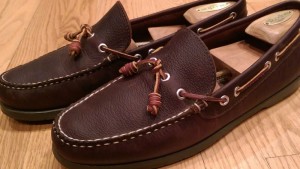 If we are to compare to the Blucher’s successor, my admittedly only hardly worn in a year pair of Camp Mocs, I’m thinking, not bad…perhaps even a backup career should the crotchety old men’s store salesman gig fall through.